Héctor Moreno shows some love for Austin FC on Twitter and we are here for it.

About time we got some juicy player rumors as we head into peak DP signing season for the club.

If you don’t know the scoop yet, Mexican left-footed defender Moreno liked and retweeted an Austin FC post against racism on June 4. He quickly undid the RT, but the “like” lives on.

We did a bit more sleuthing and found Moreno also follows the official Austin FC and MLS accounts on Twitter.

Big deal, right? Well, he only follows 250 accounts and Austin FC is the ONLY MLS team on that short list. In fact, he follows very few clubs at all, except Roma and others he’s been associated with.

Moreno has apparently been a fan of the Verde for awhile—he also liked Austin FC stadium tweets back in 2019. 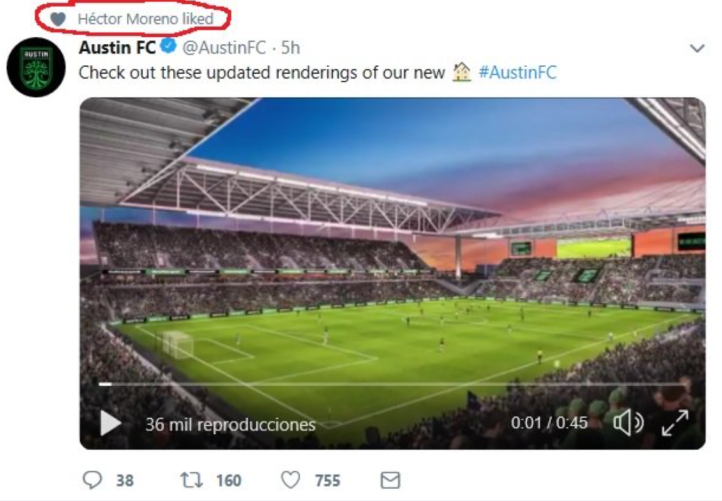 Our heads are spinning. What does it all mean?

It’s not loco to think Claudio Reyna and Héctor Moreno have done a Zoom call.

Moreno is a veteran player, with decorated stints in Liga MX, La Liga, Serie A, and the Dutch premier league. At 32, he now finds himself in far-flung Qatar during a pandemic, transferring to Al-Gharafa in the past year or so.

Maybe Héctor Moreno is looking to be closer to family and friends in Mexico, following the MLS path of Vela and Hernández. It’s right up Austin FC’s alley to sign a well-known player from Mexico’s National team (after losing out to Chicharito).

Will Austin FC be next?