Austin FC announced a new $45 million training facility coming to E. Parmer Lane in Northeast Austin. Officially called the St. David’s Performance Center, it will be a home away from home for players and staff. Soccer operations staff will be headquartered here. It’ll also serve as HQ for Academy coach Tyson Wahl and the youth academy program.

Like the stadium at McKalla Place, this state-of-the-art training facility is expected to be completed by spring 2021. Did you know? The facility is just a 10-minute drive to the stadium.

Highlights of the complex:

St.David’s Performance Center by the numbers:

Scheduled to open in 2021#AustinFChttps://t.co/vHHD2kgzVs

The 23-acre complex will anchor the Parmer Pond development, a mixed use 300-acre business park with retail and recreation areas being developed by the Parmer Innovation Center. Of course, it also has an 11-acre pond. 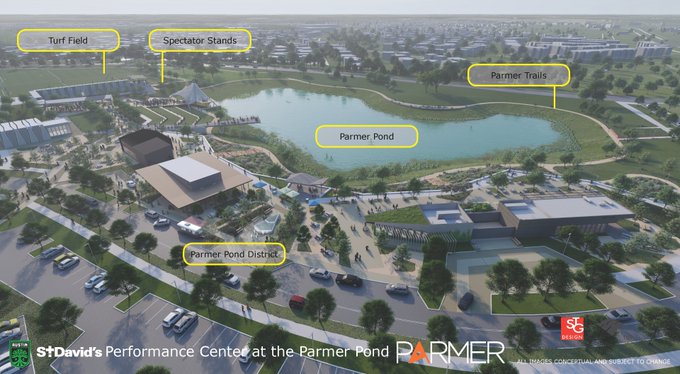 So what “training” will actually be going on in the training facility? It’ll feature such things as advanced cardio and physio equipment, recovery rooms, water therapy and cryogenics, among others.

In addition to the obvious, there are several other benefits of this facility:

The great thing is that parts of the facility will be open to the public, including viewing stands with 1,000 seats, connecting it to the community.